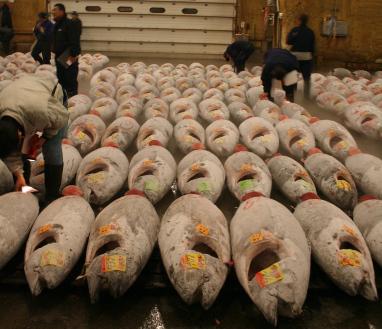 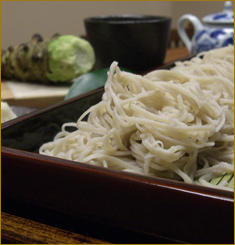 According to the Michelin Tokyo Resaurant Guide, Tokyo is one of the most gourmet cities in the world, with 150 restaurants receiveing the stars. The number is more than what New York or Paris has received.

A Canadian writer, Mark Schatzker, took a flight to Tokyo to see and taste for himself if this feat as true. Michi Travel Japan arranged a 3 day Tokyo Gourmet Tour for him to experience all kinds of gourmet spots from one of the largest fish market in the world, the kitchen of a Soba (buckweat noodle) restaurant, a district with established food shops such as tofu stores and shabu-shabu restaurants, to high-class fruit stores. Mark has put his experience in words for Globe and Mail, a national newspaper in Canada.

Here are excerpts from the article.

Japan's obsession has caught the attention of the ultimate in establishment gourmands. In November, Michelin -- the restaurant-rating publication that has been known to drive chefs to suicide -- came out with its first-ever Tokyo guide. And what a guide. The 150 restaurants it rated received no fewer than 191 Michelin stars, almost triple the number bestowed on Paris. All of which suggests that when it comes to good eating, Tokyo is tops. At least, according to the French.
Not that the Japanese are in the habit of caring what other countries think of their food. They're too busy worrying about it themselves: About 40 per cent of the shows on TV involve cooking, in Tokyo alone there are 160,000 restaurants and in and around the city are theme parks such as Sweets Forest and museums devoted entirely to fruit, curry and ramen noodles.
In their spare time, the Japanese also go on culinary tours -- to Hokkaido to eat the freshest sushi, or to the coast in winter to soak in hot springs and eat crab. According to one local food critic, the Japanese mania for eating even has a name: "the madness."
Being a perpetually hungry sort of person, the first thing I did upon hearing all this was book a flight to Japan. The second thing I did was plan a three-day eating tour of Tokyo with Michi Travel, a Japanese company that specializes in culinary trips and serves English-speaking customers.
Guiding me on my quest would be Mari Okada, a graduate of Le Cordon Bleu in Ottawa and probably the only person among Tokyo's 13 million residents who thinks the city is sorely lacking in beaver tails, poutine and Montreal-style bagels.

But as cultural clichés go, Tsukiji is worth it. It's not every day that you get to witness a swarm of fish buyers set upon a warehouse full of dead tuna with little pickaxes, chopping tiny wedges into the tails of 120-kilogram bluefin tuna to assess the level of fat -- the more, the better -- or that you get to stand next to a man who enters a winning bid of $18,500.
It takes just a stroll down one of Tsukiji's narrow streets, however, to realize that Japanese food fervour extends well beyond sushi. There are clams for sale as big as dinner plates, wooden bins piled with fluffy mounds of dried tuna shavings, and a staggering variety of pickled fish eggs. One store specializes exclusively in dried seaweed. A little farther along, I came across a butcher shop selling the most marbled beef I have ever laid eyes on. The meat hailed from Iwate Prefecture and was selling for $100 a pound.
............

Why do the Japanese eat so well? Like the Italians and French, they seem unwilling to tolerate anything other than delicious food.
One theory holds that the Japanese make it their mission to perfect the things they love -- jeans, electronics, animation, knives -- so it only makes sense that they would take the same approach to food. As The London Times noted when Tokyo's triumphant Michelin status was announced, the city's culinary prowess is a "natural extension of the national spirit of monozukuri -- 'the making of things.'" When I put the question to Mari, she also told me that from a young age Japanese children are taught to thank farmers before they eat. It's hard to buy any Japanese ingredient, be it fish, fruit, buckwheat or sake, without being informed what prefecture it hails from. This is a country, in other words, that has a very real connection to its land.
Finally, there is what you might call the Iron Chef theory, which is that high-quality ingredients aren't just about flavour, they're about prestige. This could explain why exquisitely packaged food items are often given as gifts, and why Madeleines at one patisserie in Tokyo are stamped with the exact time they were made.

I never wanted food to stop tasting this good. As I sat there, eating that excellent-but-not-quite-perfect mandarin, I thought of tuna that goes for $18,500, beef that costs $100 a pound and buckwheat noodles that take three years to learn how to make. A few days ago, these things all struck me as the ridiculous enthusiasms of an eccentric people. Now that I had tasted it all, I had a different opinion: It's worth it. 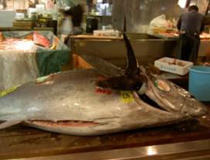 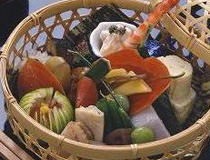 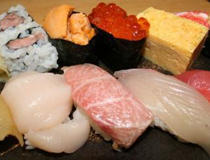