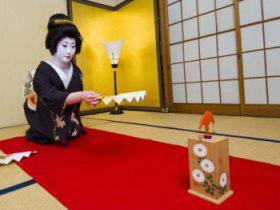 Michi Travel Japan's dinner plan with geisha performance in Kagurazaka was featured in Reuters' article, and was wired across the world. Major newspapers such as International Herald Tribune and Washington post carried this story.

The article talks about how the traditional Japanese entertainment business is undergoing a transitional period. At its peak, the number of geishas across Japan was about 80,000, but now there are only 1000. In order to survive, geisha's exclusive world, which was only for powerful businessmen and politicians, is opening up to tourists.


Below are excerpts from the article.

In Kagurazaka, central Tokyo, a non-profit organisation began offering performances by geishas two years ago, unthinkable in a neighbourhood where geishas were rarely seen on the streets and were shrouded behind the gates of the ryotei.

"The geisha's tradition will survive within the ryotei for people who are willing to pay high prices," said Keiko Hioki, vice president of the group, Ikimachi Club. "But to preserve the geisha's world as part of our culture, it must be better known to the general public."

Surprisingly, the performances are popular with women and the district is now opening up to foreign tourists, with travel agent Michi Travel Japan (https://www.michitravel.com) offering tourists the chance to experience authentic geisha performances.

Some purists are aghast at the changes underfoot, such as geishas performing for tourist groups. But for Kanae, a geisha from the Asakusa district in Tokyo, saving the geisha profession is about more than just preserving traditional arts. "So much of Japan has become Westernised," she said. "Many people cannot speak proper Japanese any more. "But in our world, the best of Japan remains. So I hope more people, both Japanese and foreign, come to experience it."

For more information on arrangements in Kagurazaka, see our Kagurazaka page.